Short version: The Logitech k480 does exactly what it says it does in that it lets you pair with up to 3 devices via Bluetooth and switch between them seamlessly. It’s simply far too large for practical use in my opinion unless you replace your desktop keyboard with it, but it isn’t nearly good enough as a keyboard for that.

I visited the Logitech booth at Microsoft Ignite in may, ostensibly to check out their unified communications equipment, but I recall being intrigued by a couple of Bluetooth keyboards as well. Unfortunately, the passage of time caused me to conflate my memory of two entirely separate devices into a single, mythical, device that I thought I ordered last week but obviously didn’t, because what I thought I was ordering doesn’t, and likely can’t, exist.

I recalled a multi-device keyboard and I also recalled a tiny, almost weightless keyboard that I believed would be the perfect companion to my iPad Air 2. I use my iPad Air 2 all the time, and while it would be nice to have a hardware keyboard some of the time, I don’t need one even half the time, so I’ve avoided buying one of the many keyboard cases on the market, including on very highly reviewed one by Logitech. I also have several Apple Wireless Keyboards, but they’re large enough to be inconvenient to just snatch up on the way to a meeting in case I need them, and also not in any way integrated with the iPad itself. Somehow, in my foggy memory from Ignite, I had discovered a multi-device keyboard that was barely the size and weight of the front flap of my off-brand cheapie iPad case. So when I saw Amazon run a daily deal on Logitech iPad/tablet accessories, I jumped to order what I thought I remembered using – the K480.

When the K480 arrived and I took it out of the box, I knew I’d made a mistake, and I almost put it right back into the box to return to Amazon, but I figured I might as well give it a fair shot to see if it could meet my needs.

The K480 is a beast, especially compared to other tablet keyboards, but I believe that’s actually not a fair comparison. The K480 is larger than an Apple Wireless Keyboard, and nearly as tall as many standard keyboards, and I’d say that’s because Logitech believes some users may simply replace their desktop keyboards with it. I can’t imagine doing that, given the fairly low quality of the keys, their unusual rounded shapes, and the lack of any ergonomic considerations. While the K480 may stand out as a very usable tablet keyboard, it’s a terrible desktop keyboard, especially when compared to Logitech’s own excellent keyboards. I couldn’t use this thing for an hour, much less full-time. 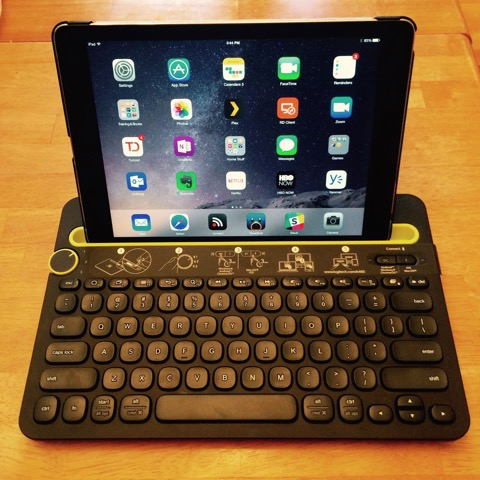 Still, for what the K480 is, which is a multi-device keyboard that allows you to switch quickly between multiple Bluetooth devices (phone, tablet, desktop), with just a turn of a knob, it’s pretty good at that. I paired it initially with 2 iPads and my iPhone 5S, and had no issues swapping back and forth. The fairly deep tray is useful for standing either a phone or tablet in portrait or landscape orientation. 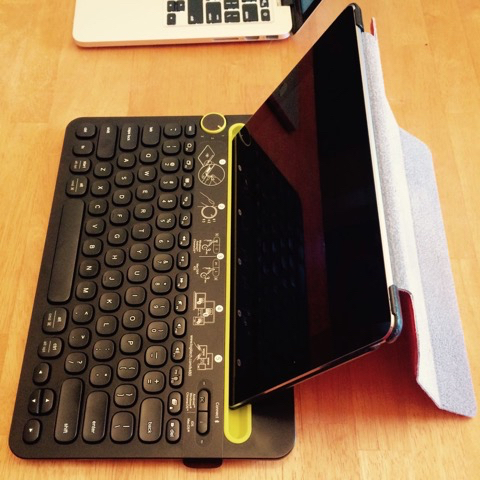 Reviews online claimed the iPad could not fit in the tray with even the thinnest of cases, but I didn’t find that to be the case. My iPad Air 2 fit just fine with its case, especially if left the front flap of the case outside the tray.

This shot shows just how thick the K480 is, and how, at least for me, it simply can’t function as a companion to my iPad Air 2. It’s nearly twice as thick as my iPad Air 2, and at 1.81 pounds, it’s also almost twice the weight. The integrated tray that holds the iPad at a good angle and the dedicated function keys are nice, but before I’d lug this thing around, I’d just take my Apple Wireless Keyboard.

The K480 definitely doesn’t work for me. I wonder, though, if any keyboard would work to the point of turning the iPad into something resembling a convertible laptop? I know Apple is introducing new features in iOS 9 that will make the iPad more friendly to heavy productivity users who want to use a hardware keyboard, but for now, I found working with a combination of dedicated function keys and the iPad’s touch screen or home button to be a disjointed, confusing mess. This is one area where the Surface Pro 3 (review finally coming soon) really shines, but then again, at double or even triple the price, it really should.

This entry was posted in Hardware, Reviews and tagged iPad. Bookmark the permalink.
%d bloggers like this: