I’ve been thinking about the topic of cloud storage lately, especially from an end-user perspective. While it disappoints me that I can’t recommend OneDrive for Business for our users, I need to be able to recommend something instead.  Working at a university means we’re not generally in the position to tell our users what they can and can’t use, but we can and do make recommendations based on our own experiences.  Some of our users already use and like Dropbox, and if it works for them, that’s fine.  I certainly use it at home and on my mobile devices, especially since many of the apps I use leverage Dropbox as a syncing mechanism for both settings and data.  1Password is a great example of that.  Dropbox’s 2GB free storage tier seems puny these days, but I’m sure that’s plenty for some people.

When someone who isn’t already using a cloud storage provider asks me for a recommendation, especially someone at work, I recommend OneDrive – the personal version.  If the user hasn’t heard of OneDrive, I ask them if they’ve heard of Dropbox, and they always have.  Then I say something that would likely make both Microsoft and Dropbox mad, “Ok, you can think of OneDrive as Microsoft’s version of Dropbox.”  Why recommend OneDrive over Dropbox, though, especially since I’ve mentioned before that I’ve never had any issues with Dropbox?  Glad you asked.

First of all, OneDrive now provides 15GB of space for free, so 7.5x the amount of free space Dropbox offers.  In addition, Microsoft recently announced a deal that lets users double their space to 30GB by simply configuring their smartphone or tablet to backup its camera to OneDrive.  Here’s a post describing here to do that at PC World.  So from a space perspective alone, 30GB of OneDrive is better than 2GB of Dropbox plus whatever Dropbox also offers for enabling camera backups. 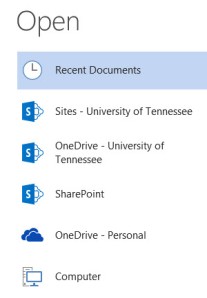 I can’t overstate the convenience and importance of this one.  Office 2013 natively knows that OneDrive is a place it can save to, just like it can save to SharePoint.  Sure, it can save to your local computer as well, but if you’ve ever taken a second to consider the file open or save locations window, it’s obvious that Microsoft would prefer its customers to think of saving to a local drive or folder as the least desirable option.

Office also leverages the same Microsoft account you use for OneDrive as a sync mechanism to keep track of your recent documents.  That’s why I can work on a new Word document on my PC at work, and later open Word on my iPad and see that file listed at the top of my recent documents, ready for use.

You can always just save to your OneDrive folder on your hard drive, and have the file sync up to the cloud, just like you can with Dropbox, but I actually like the fact that Microsoft, like Apple with iCloud, is abstracting the concept of file location away from the local machine.

Right or wrong, in general I feel like I can trust Microsoft to keep my data more secure than Dropbox.  That’s largely a feeling, but I believe it’s fairly rational based on a number of factors.

Am I saying Dropbox isn’t secure?  Not at all.  Although I hear Edward Snowden doesn’t care for Dropbox.  I use both Dropbox and OneDrive.  I keep truly private data on them, tucked into encrypted disk images, so I don’t trust either of them to be perfect.  But I do expect more from Microsoft, and that might mean I trust Microsoft a bit more.

Is 30GB not enough for you on OneDrive?  Microsoft will sell you an additional 100GB for $24 per year, or 200GB for $48 per year.  That’s plenty for me, as I am not using anywhere near the 70GB of space I have right now via various promotions.  Dropbox used to offer smaller incremental upgrades, but all I’m seeing right now is their 1TB upgrade called Dropbox Pro, for $120 per year.  I don’t need a terabyte of space, so even if I end up bumping up against the 30GB I have for free on OneDrive, I’d rather spend $24 to get 130GB of space than $120 to get 1TB.

A coworker mentioned this to me during a discussion of OneDrive.  He said he didn’t have to pay for his extra space on OneDrive this year because he got it free via something called Bing Rewards.  I laughed at the time, because, right or wrong, I still think of Bing as not being as good as Google for search results.  But I decided to give it a try.  You can learn more about Bing Rewards here, and full disclosure, I’m using my “friend referral” link, mainly to see if it even works, but don’t feel obligated to use it.

Basically, Bing Rewards gives you points for searching with Bing, with a set amount you can earn each day for searching on your desktop, your mobile device, and various other daily promotions.  If you do all of the

searches for which you receive credit each day, you should get a minimum of 26 points per day, with bonus points along the way.  I’m sitting at 487 points right now, so I will hit the 500 points required for the upgrade of 100GB of OneDrive space tomorrow.  I began my Bing Rewards searching on 9/30, mainly because I wanted to see how long it would take to get to 500 points.  I did both mobile and desktop searches each day, but am skipping mobile today because they wouldn’t put me over the top to reach my goal, and frankly they’re a pain in the butt since you have to type search terms into the mobile client.  Now that I know the answer to my question, mobile searches aren’t worth my time.  You might say desktop searches aren’t worth my time either, and they’re certainly not as a means to slowly accumulate points for this sort of thing, but I might keep doing those as well.  Why?  Because all you have to do to get your desktop searches in is click through the Bing News sections for each category, and I’ve found doing that in the morning is a quick and painless way to scan the top news headlines.

So for today, and the foreseeable future, I’ll be recommending OneDrive (personal), both personally, and for our users.  It’s free, it works, and it provides plenty of space.  I couldn’t make them use something else even if I wanted to, and until or unless OneDrive for Business improves, especially on the syncing issues front, I have to point folks to something that works.  I’d really love to have the budget to deploy something like Citrix ShareFile, but that’s money-wise that’s not in the cards, even if it might be a good topic to address in a future post.

This entry was posted in Cloud Services, Storage and tagged Microsoft. Bookmark the permalink.
%d bloggers like this: